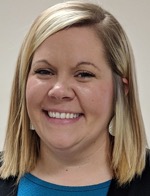 Chelsea is a member of the class of 2006 at Mansfield HS. She participated in Basketball, Volleyball, and Track and Field. She was a 1,000 point scorer, an NTL First team All-Star, and NTL Senior All-Star.  During her four years with the program, her basketball teams won 4 league titles, 2 District 4 Championships and State Tournament games. As a Volleyball player she was first team NTL and NTL Senior All-Star, and District 4 All-Star. While a member of the Volleyball teams Mansfield won two District Championships and a Regional Championship. She was also a district qualifier in the shot put and discus for the North Penn Track and Field team. She attended California University where she was a member of the Track and Field and Rugby teams. She currently lives in Oswego, NY with her husband and 2 children and works in the Nuclear Power Industry