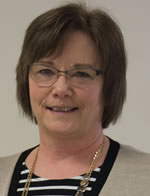 Cindy is a graduate of Williamson HS class of 1979. Cindy is the first person to be inducted into the Hall of Fame for gymnastics. She is the only Williamson 4 sport athlete. She participated in gymnastics from 1975-79 where she was captain her junior year and co-captain her senior year. She was on the Basketball team from 1975-79 and captain in 1978 and 1979, Track from 1975-79, and Volleyball 1976-79. Cindy was the Gymnastics MVP in 1977 and was the highest all-around scoring gymnast. In 1977 she placed 3rd in vaulting and 4th in the uneven bars at districts, and her junior year she placed 2nd in uneven bars, and 3rd in vaulting. Her Gymnastics team tied for first in the NTL in its' final year of competition with a record of 5-1. She was also a member of the 1977 undefeated NTL Volleyball team and 1979 NTL team. Cindy was assistant Volleyball coach in 2010 that was Williamson's first District IV championship and also her daughter Nichole played on that team.