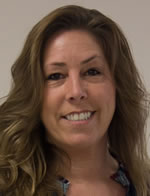 Dawn graduated from North Penn in 1989. She participated in Track and Basketball for 4 years, Volleyball for 3 years, and cheerleading for one. She was Captain of the Volleyball and Basketball teams her junior and senior years, and an All-Star in both sports each of those years. Dawn was the first North Penn female athlete to earn 4 Varsity letters. She was selected to the All-Twin-Tiers Basketball Team and her senior year was MVP of the Kiwanis Basketball Christmas Tournament. In Track and Field she was a District Qualifier in the high jump, long jump, and triple jump. Her team awards includes 1988-89 NTL West Basketball Champs, 1988-89 Volleyball District Championship, was a member of the 1600 meter relay team that set the school record. Also a member of the NTL A Division runner-up. She graduated in 1993 from Marywood College where she played Basketball and Volleyball. In 990 she was ECAC Volleyball Player of the week.