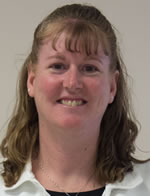 Erin is a 1993 graduate of Bald Eagle Area High School. She played Softball and Basketball from 1987-1993. Erin was a 1,000 point scorer in basketball and received awards for rebounding, assists, steals, and was team MVP. In Softball she was MVP and won the offensive player award. She received the Harry Smith Award for Academics and Sports and played in districts and advanced to states in both sports. A 1997 graduate of Mansfield University, and a member of the Lady Mountie Basketball team, she was in the top 10 in MU history during her career in steals, assists, rebounds, and points. Erin currently teaches at North Penn-Liberty High School, where she coached Junior High and Varsity Basketball for 10 years. During her tenure she coached two 1,000 point scorers that continued on to college, and guided the girls to the first District IV Basketball win. She has coached elementary basketball for over 10 years, along with Liberty Little League Baseball. Currently she is coaching Liberty Little League Softball.