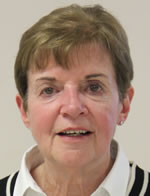 Jane's involvement with Mansfield High School athletics began with her husband, Terry, and children. She began as a time at Twilight Track Meets at the University as Terry would get his daughter, Kim, and his son, Brad and other children ready to run in their events. She spent 7 summers involved with this. When Terry became girls track coach at Mansfield, she spent 10 years as a time. She began doing shot charts for the girls basketball coach, Mr. Jackson, which then led to keeping the scorebook for three years. Jane then started a 32 year career as boys scorekeeper and announcer. She decided that after all those years she had ridden enough in a bus to games. In has been a pleasure for her to have traveled all these many hours cheering on Mansfield sports teams.