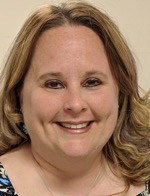 Kate graduated from North Penn HS. She played 4 years of basketball, volleyball and track, and was the manager for her Dad's basketball and football teams. She was 1st team NTL in basketball and a Kiwanis Senior All-Star. She played 7 years of volleyball for the Southern Tier Volleyball Club coached by Patty Perone. Kate was recruited to play volleyball at Clarion University where she was a captain her senior year. She led the team with service aces. You could put a quarter on the floor on the other side of the net and she could hit it with her serve. She went on to Coach at Charlotte Latin School where she led her team to 2 State Championships.