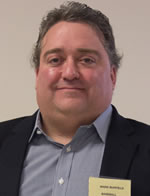 Mark is a 1986 graduate of Elkland HS. During High School he played Legion Baseball, Varsity Soccer, Football, Basketball, Track and Field, and Tennis. He was Player of the Year in Tennis is 1986. His senior year he was Co-Athlete of The Year and Scholar Athlete of the Year. He received multiple recruiting offers from Division 1 and 2 schools as a football kicker. Mark was a member of the Elkland Legion Baseball team that was league champions in 1985 and 1986, and played in the state tournament. He graduated from Lock Haven University in 1990 where he was a kicker on the football team in 1986 and 1987. He coached 3 years as JV and Varsity Baseball coach at Elmira Free Academy, and JV Basketball at Elkland. He has taught mathematics in the Elmira School District for 27 years. His father Clinton is also a Hall of Fame member.