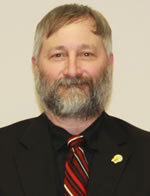 Roger graduated from Montoursville HS Class of 1976. He played 6 years of Football, Wrestling, and 4 years of Tennis. He graduated from Lock Haven University where he wrestled one year. As Wrestling Coach at Liberty for 4 years, he had 4 wrestlers qualify for State Competition; One, Mike Davis came in 2nd. Roger took 10 wrestlers to Districts and 6 to Regionals. He was Assistant coach for 4 years at North Penn for the Football team. Roger became a PIAA Football and Wrestling Official in 1983 and is still doing both today. He has done both District Semi-Final and Final games in Football, officiated at all 4 different sectional wrestling tournaments, and was the wrestling chapter interpreter for a number of years.

Before becomming AD at Liberty, he helped the different sports teams as scorekeeper and ran the clock at home events. Roger was the AD at Liberty for 22 years, during which he was a member of the NTL AD's, District IV AD Association, and the State AD Assoiation (PSADA). He was a state delegate from District IV at the PSADA convention for over 10 years. As AD at Liberty, he helped start Girls Softball and Girls Soccer programs, was a member of the Booster Club and helped run the elementary wrestling tournaments, as well as the old timer's tournament for 2 years. Roger started and ran the Liberty Duals (wrestling tournament) and is nowhelping with the Kiwanis Boys Basketball Tournament at Liberty each year. He has been a member of the PIAA District IC committee for the past 13 years; the first 2 years as the AD rep and then as Junior High rep for the last 11 years. On the District IV committee, he has been the District Tennis chairman for the last 12 years and helped Mr. Botsford bring in the by-law for co-operative sports that both Northern Tioga and Southern Tioga school districts (as well as many others) use so more students can participate in sports.