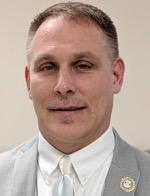 Graduated from Wellsboro Area HS in 1989 where he participated in Football and Track and Field. High School individual awards include Defensive player of the year 1987 and 1988, Outstanding lineman and MVP in 1988, Winner of the Rev. Wade Stewart Memorial Award 1988, 1988 football captain, 1st team NTL linebacker and 2nd team lineman. Track and Field he was the NTL 110 meter high hurdle champion, and 300 meter intermediate champion, 1989 District 4 Champion in high hurdles and second place in intermediate hurdles. He was the 1989 team captain and qualified for states in both hurdle events. Steve graduated from Mansfield University in 1995 where he was a member of the football team. His individual accomplishments and awards include, Off Season Workout Award 1991, Most Improved Player 1992. In 1993 he led the team with interceptions. He was team defensive captain in 1994. A 4-time PSAC Honor Roll Player of the Week. 2-time ECAC Honor Roll Player of the Week. 2-time PSAC scholar athlete 1993 and 1994. His 259 career tackles ranks him In MU's top ten all-time. Steve was selected to play in East-West Senior All-Star Game in Columbus, Ohio. He coached various sports for 16 years.