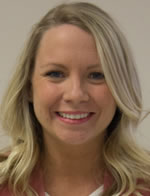 Tesia is a member of the Mansfield HS class of 2007. She was a member of the Tiger Volleyball and Basketball teams. She is the all-time leading girls scorer in Mansfield history with 1,786 points scored. She was the first Lady Tiger to earn All-State honors, duing so in both her junior and senior seasons. She was awarded the PIAA District IV Female Sportsmanship Award in 2005. Four-time NTL West All-Star. 2007 Sun Gazette Player of the Year. During her 4 years her teams won 4 league titles, 2 district championships, 4 state tournament games, and 99 overall games. In Volleyball she received All-State honors in 2006, First team NTL West, and District IV All-Star in her junior and seniors seasons. A member 3 District Champions and a Regional Championship. Tesia attended Elmira College class of 2011. As a member of the Basketball team she currently ranks 9th in 3 pointers. In her volleyball career at EC she ranks 3rdin program history with 3,056 assists, and second in assists in one season with 1,255. She earned honors for being named to the EC Invitational All-Tournament team in 2008 and 2009, SUNY Plattsburg All-Tournament team in 2009. She was awarded the American Volleyball Coaches Association Honorable Mention in 2010, ECAC Award of Merit in 2011. Additionally she received the Booster Club Player of the Year in 2011.