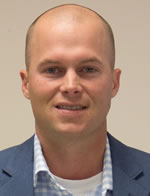 TJ graduated from Elkland High School in 2006. During his high school years he participated in Golf, Tennis, and Basketball for four years and Baseball his Sophomore and Senior years. His individual awards in high school include Golf: 2004 District IV champion, 2005 PIAA State champion, two-time NTL Player of the Year. He is the NTL record holder for scoring. Basketball: 1,000 point scorer. His senior year he was NTL Player of the Year and the District IV scoring leader. He was a member of two NTL West basketball championships and two District IV chamionships. Upon graduation he attended Penn State University where he was a member of the Golf team. He had 3 individual wins, was an NCAA All-American in 2010. While there, he participated in two NCAA Final appearances. After college TJ turned professional. In his 6 years as a pro, he carded 11 victories, played in the 2016 US Open, 2015 Wells Fargo Championship, 2016 web.co., and Mackenzie Tour member. He currently is the assistant golf coach at Penn State.